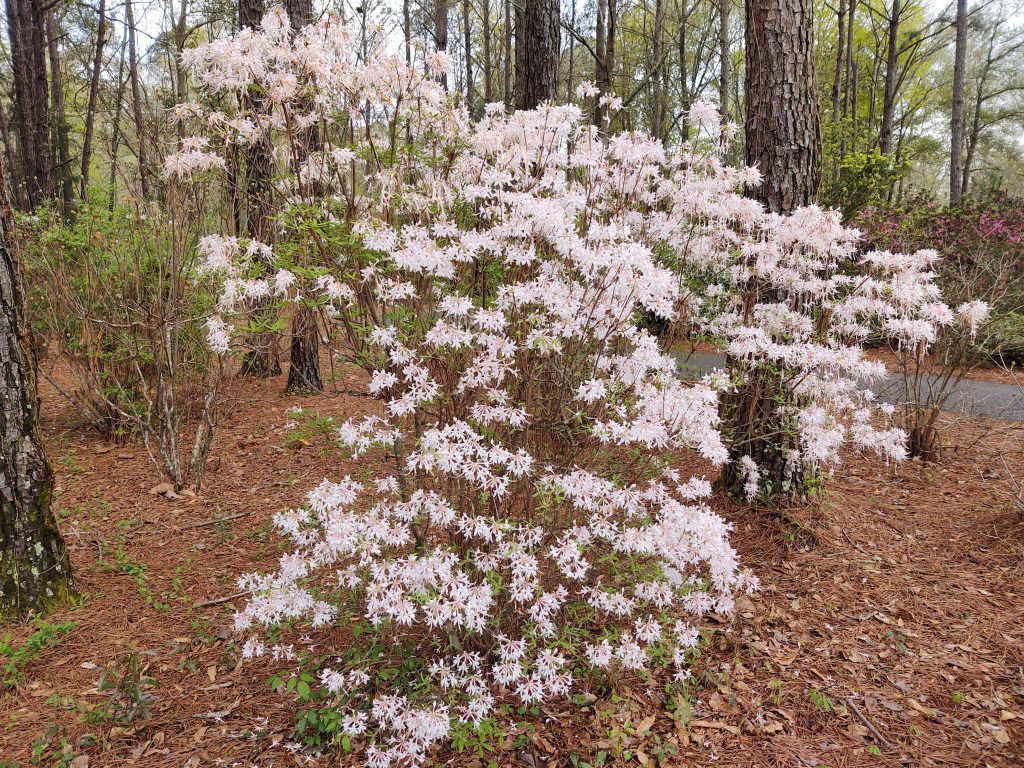 Native azaleas aren’t hard to grow by any means, but they are a bit less forgiving than their evergreen counterparts. Although some species grow in wet soil, most, including like good drainage.

The native azalea area of the Gardens was expanded significantly in 2021 with a generous gift by Earnest Koone III, owner of Lazy-K Wholesale Nursery  , LLC, in Pine Mountain, GA.  which includes  3-5 examples of each azalea species native to Alabama.  Watch and sniff with us as these azaleas bring new beauty and fragrance to the Gardens from early spring through early fall. 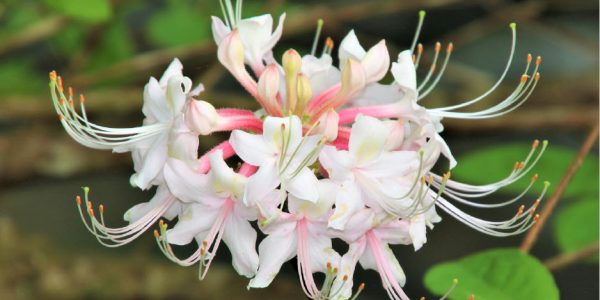 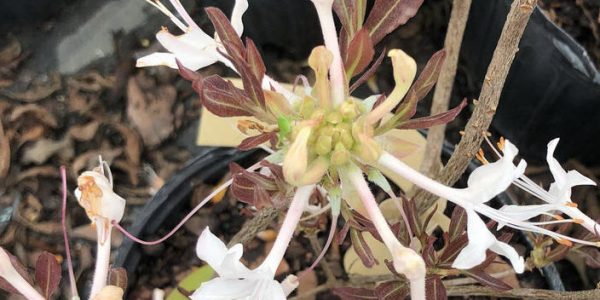 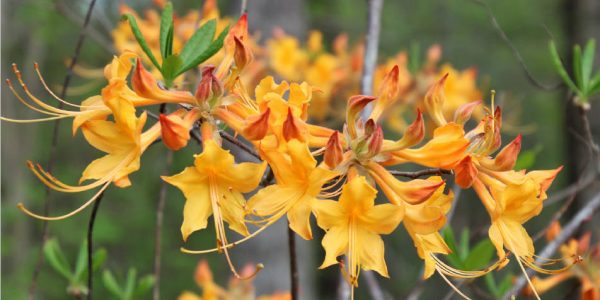 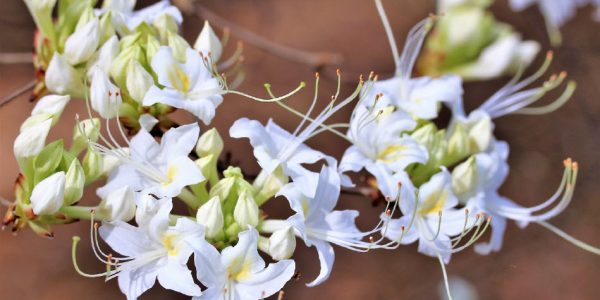 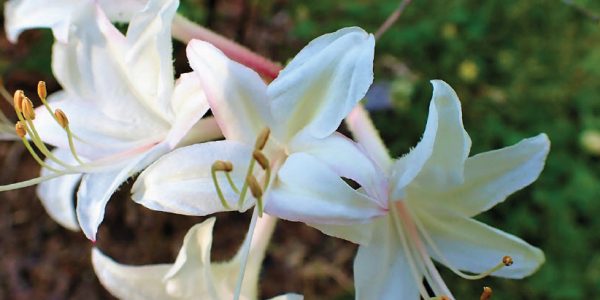 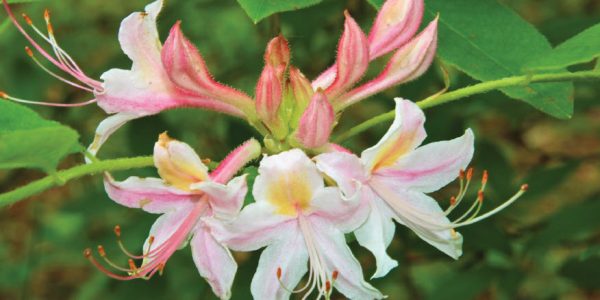 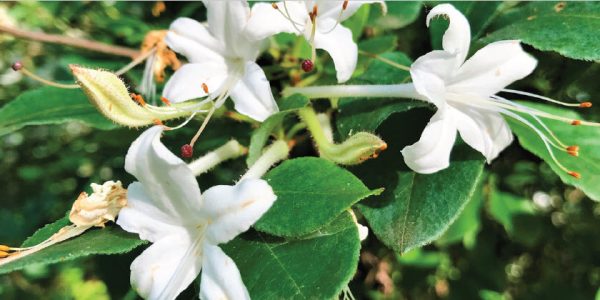 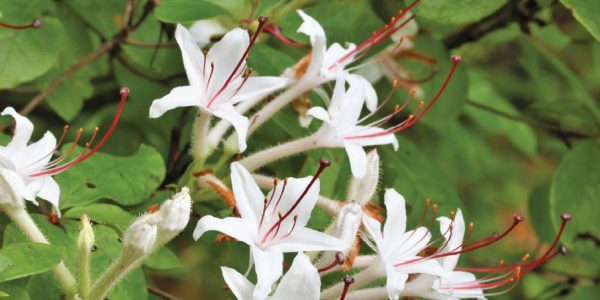 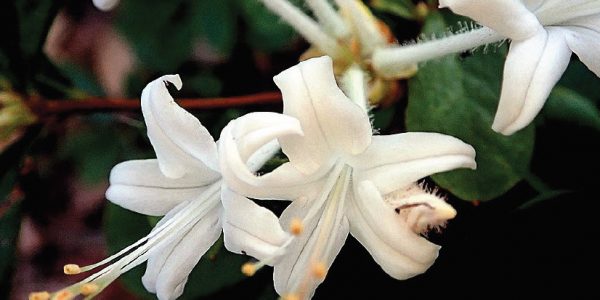 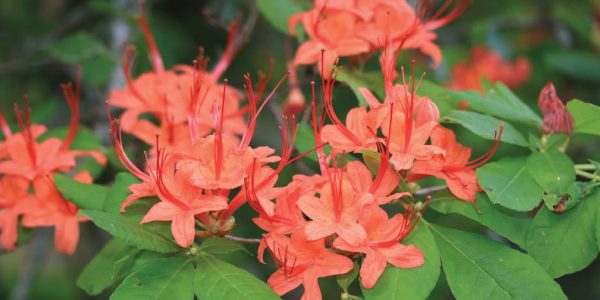 The Piedmont Azalea has flowers that range in color from pure white to blush pink to strong rose, with a robust honeysuckle fragrance. It can be a large grower attaining heights from ten to fifteen feet. It is one of the earliest bloomers, with flowers appearing in late March.

A selection of the Piedmont azalea chosen from thousands of seed-grown plants.  It sports new foliage
emerging a very unusual bright chocolate red, similar to a red Japanese maple,  which persists until mid-summer when the foliage turns olive green. The flowers are fragrant pink which are enhanced by the foliage color.

The Florida Azalea ranges in color from clear yellow to orange-red. It has a pleasant honeysuckle fragrance. It blooms in late March to early April and can attain a height exceeding ten feet.

This azalea flower is typically white with a bright yellow blotch, but is sometimes flushed with pink. The attractive lemon fragrance is most distinctive. It blooms mid to late April on plants growing from three to ten feet in height.

The Flame Azalea produces flowers that are variable in color; from distinct clear yellow through orange to red. Some forms may start blooming in early May, while others flower mid to late June. The blossoms are generally larger than those of the other species, and do not possess fragrance. The height can exceed ten feet.

The Swamp azalea blooms from mid-May to early June. Its slender tubular flowers are white (rarely pink) and fragrant. It is native to Alabama and can be found in Mississippi, Florida, and areas up the East Coast as far as Maine. Most plants are usually low-growing under 8 feet.

The Coastal Azalea is a low growing stoloniferous species, ranging from three to five feet with beautiful blue-green foliage. The flowers, appearing in late May, are pure white or white flushed with pink, some with a distinct yellow blotch and a most attractive fragrance.

Red Hills is a newly discovered large species that can grow to 20 feet tall. It sports a variety of flower colors including white, pink, salmon, light orange, and all shades between, both with and without a blotch. The flowers bloom in May and are very fragrant.

Hammocksweet has fragrant white flowers, grows 10-15 feet tall, and blooms from June to September.  It is the southernmost native azalea, with a range extending along the Gulf Coast.  It has the most vertical growth habit, typically three time taller than wide.

The Plumleaf Azalea has a flower that ranges in color from orange to red and possesses no fragrance. It is a large grower, to fifteen feet. It blooms from July through August and flowers best in semi-shade which provides some protection from the mid-summer sun. This is the signature plant of Callaway Gardens.

The Sweet azalea is considered by many authorities to be the best of the native white azaleas. It is white, can be flushed with pink, with a strongly contrasting red style and is highly fragrant. The southern form of the plant blooms from July into August. It is a large plant ranging in height from eight to twelve feet.