Pitcher plants are several different carnivorous plants which have modified leaves known as pitfall traps—a prey-trapping mechanism featuring a deep cavity filled with digestive liquid. The traps of what are considered to be “true” pitcher plants are formed by specialized leaves.

Insects and other prey are attracted to the mouth of the pitcher by a trail of nectar-secreting glands that extend downward along the lip to the interior of the pitcher. The throat of the pitcher, just below the lip, is very smooth and sends the animal tumbling down into the liquid pool at the bottom of the pitcher, where it drowns. The body is then digested by enzymes secreted within the leaf.

The pitcher plant bog at the Gardens contains several varieties. 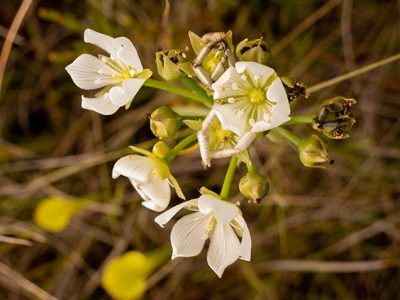 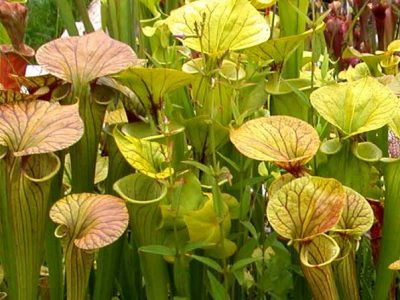 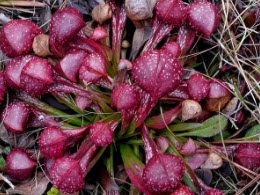 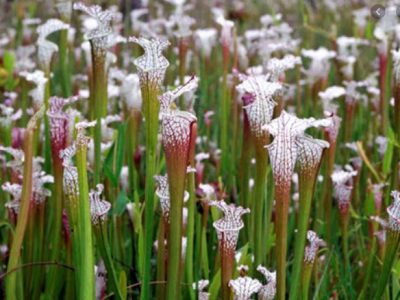 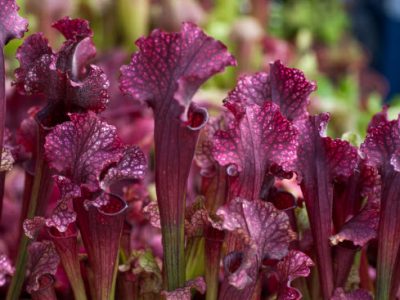 Found mostly in coastal environments from Louisiana east to Florida and Cuba and north to Nova Scotia, where it is listed as a threatened species by Canada’s Species at Risk Act.  Carolina Redroot has grass-like foliage and creamy yellow summer blooms that blend well with other plants native to the eastern coastal plains. It tends to be less common from Tennessee and Maryland northward and is listed as threatened, endangered, or of special concern in several US states. Its seeds are favorites of Sandhill Cranes.

The Yellow Pitcher Plant is a tall southern pitcher plant with distinctive green trumpets and frequently shows red veins. The nectar glands along the hood margins and throat are very productive, and attract many flying insects, particularly wasps. S. flava grows well in wet bog soil. It has its best traps in Spring when they are considerably larger and sturdier. They fade by Summer and develop phyllodia (flat leaves) that persist through winter. The very large and showy flowers are yellow, and fragrant. They are one of the largest and most spectacular blooms within the Sarracenia. They generally bloom from March to May before the pitchers fully develop.

The Parrot Pitcher Plant is low growing southern pitcher plant with green and red bulbous traps. They have a very distinctive shape, reminiscent of a parrot’s beak with white areoles (windows), and has a small hidden opening. The low lying trap is unique among Sarracenia, in having a lobster pot trap structure rather than the typical pitfall. This allows prey to be trapped in air or water. Ants and other small crawling insects are common prey, as are small aquatic organisms. This species shows a preference for open, sunny, very wet habitats that are frequently, but briefly flooded. It tolerates shade. The traps darken in the Fall to deep red maroon. S. psittacina often persist through the winter, tolerating light frost, and very wet winter conditions. Pitchers often last for 2 years. The flowers are small, dark red, and fragrant. They generally bloom from March to May before the pitchers fully develop.

White Top inhabits moist and low-nutrient longleaf pine savannas, primarily along the United States Gulf Coast, and generally west of the Apalachicola River on the Florida Panhandle.  It has nodding, brownish-red flowers and clusters of erect, hollow, pitcher-like leaves. Each leaf is colored at top with reddish-purple veins on a white background and topped by an erect, roundish, wavy-edged hood.

The plant is a listed vulnerable species on the IUCN Red List of Threatened Species. The greatest threat to S. leucophylla, as is the case with most Sarracenia species, is loss of its unique wetland habitat to development along the Gulf Coast, as well as forest succession that was historically kept in check by natural wildfires.  It is also endangered from being one of the largest and showiest Sarracenia species, and is vulnerable to poachers of living plants and to the cut-floral trade for use in flower arrangements.

Admission $5 for non-members age 16 and above. DHCLS Connect Pass accepted.

Nursery with 10% discount to DABG members